As part of my research into marketplaces I've been digging into the IPO prospectuses of three recent marketplace IPOs:

The three make for an interesting comparison study with Just-Eat and GrubHub being very similar businesses and Zoopla being a very different one, giving some insight into what a modern "unicorn" marketplace looks like and what early-stage marketplace startups should be aiming for in the long term.

(All currency amounts have been converted to USD;  market cap as of 14th August; the ratio is marketcap/revenue rather than PE ratio).

While all three marketplaces have broadly similar revenues it's notable how much the valuations of GrubHub and Just-Eat have diverged post-IPO with GrubHub trading at significantly higher ratio (they have similar expenditure and growth figures).

It's hard to say if the pricing is "bubbly" but it shows a clear geographic influence in pricing. Although it's not obvious how much of the GrubHub premium is because of it's dominance in the US market (the largest single take-out market in the world) and how much of it is down to the fact it's listed on a US exchange.

Either way the implication is that US marketplaces can enter the unicorn club with lower revenue figures than non-US marketplaces.

On a broader level if we take 12-13x as a lower bound for these ratios then that implies a marketplace needs to reach annual revenues of around $80m to get into the unicorn club.  Although it's worth noting that these ratios are for high-growth marketplaces which are the dominant players in their markets.

Although from the consumer-side takeaway and real-estate are very different businesses, the vendor side is much more comparable if we look at number of vendors, average revenue per vendor and revenue per lead:

An insight worth pulling out is that even though the Just-Eat/GrubHub charge using a commission model (typically charging around 10% per transaction) and Zoopla charge on subscription model (vendors pay a monthly fee) that the revenue/vendor/lead figures work out roughly the same. It's not a case of unicorn marketplaces having to use one model or the other.

Given that the definition of a lead is very different for the takeaway marketplaces (an order being placed) and for real-estate (an expression of interest in seeing a property) the revenue-per-lead being similar might be coincidental;  however there might also be some market dynamics at play that explain the similarity (i.e unicorn marketplaces that charge an order of magnitude less would require vastly more transactions making them much rarer). 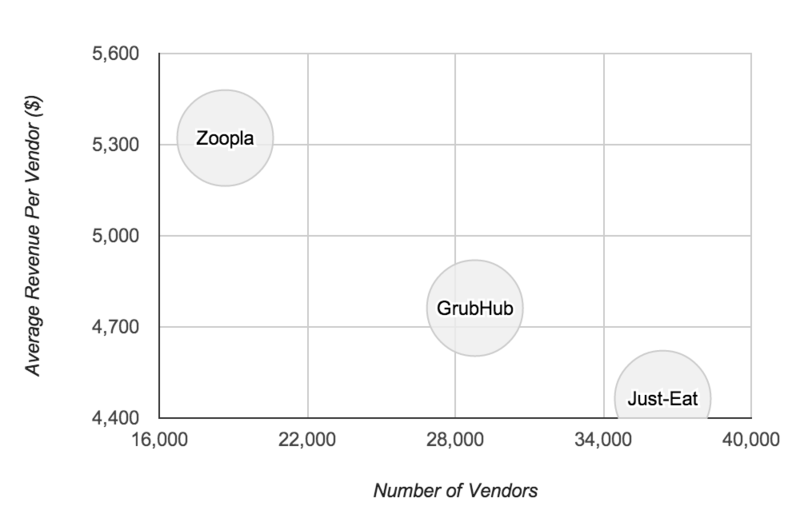 The number of vendors and revenue/vendor that early stage marketplaces should be targeting becomes much more obvious if we graph the companies. As all the companies have similar revenues they fall roughly along what we can call the "unicorn line" - if a marketplace is serving a market in which it's hard to cross-above the line (i.e too few vendors; not enough value generated for vendors) then it's likely to be hard space to build a unicorn marketplace.